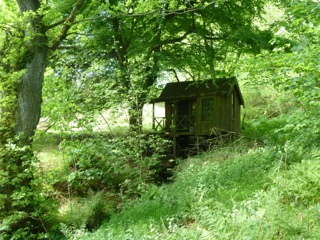 The wisdom of Yeshua Mariyah surfaces whenever love’s glory is unveiled, as in the Shrine of Saint Melangell at Pennant or here in Saint Melangell’s Cell, hidden in old woodland over a running stream.  There is no end to love’s glory whether here where elemental energies meet, or in the Wisdom Cell where the Beloved Disciple’s witness to resurrection soars beneath the dome as in a cave.  Wherever we turn, turning opens to seeing and glory is revealed.

The Beloved Disciple remained anonymous except in the communities that remembered her name, the Churches that transmitted her Gospel and the Gospel of Philip and knew her as the Co-Companion of Yeshua.  But her Apostolic witness to the resurrection was heard in all the Churches when she functioned as the Apostle to the Apostles.  Her intimate wisdom of Co-Communion and union in the mysteries became the tradition of the whole Church when the Gospel of John was embraced within the Canon.  Her Gospel was known as the ‘Spiritual Gospel’ and has nourished all who experience illumination and union for two millennia.  Patriarchy was at peace because the fourth evangelist or his redactor was called John, and the Community of the Beloved Companion was at peace because they lived the Beloved Disciple’s union with her Beloved as an inexhaustible THEOSIS.  Patriarchy fulfilled its function in a Patriarchal Age undisturbed by the presence of Mariyah at its heart, unaware that the uncreated energy inspiring it was transmitted through her radiance, transcending gender, race and religious conventions.

The beauty at the heart of this completeness is visible in Saint Melangell who protected the hare fleeing from the Prince’s hunt.  Her Sanctuary is a haven of peace that resonates with love’s glory like the Gospel of John.  No-one needed to penetrate the true identity of the Beloved Disciple because it is the mystery of self-emptying, bearing witness not to herself but to her Beloved.  No-one needs to know that Mariyah the Migdala was the tower of strength that healed Peter’s confusion, although he could not acknowledge her. Patriarchy owes its strength in the resurrection to her but cannot acknowledge the fact without transcending itself.   In fact it has always been nourished by this transcendence, which generously pours itself out without holding anything back.   It does so because the Beloved Disciple really learned love’s glory from her Beloved and never ceases to share the mystery of love in all its hidden glory.