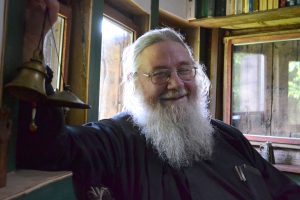 ‘Wisdom Songs’ is a book of five centuries of gnomic wisdom chapters on the Holy Name, the Song of Songs, Holy Wisdom, the Mysteries of Glory and the Wisdom of Stillness.   Written between July 2009 and March 2010, Wisdom Songs was published on June 15th 2011 by the Sophia Institute in New York, using the imprint Theotokos Press.

The Century is an ancient monastic wisdom genre beloved in the desert from Abba Evagrius in the late fourth century to Kallistos and Ignatios in the late fourteenth century.  Centuries have been collected and treasured but not reused since then.  The best known anthology of centuries is the Philokalia, collected by Makarios and arranged by Nicodemus, published in 1782.  Translated with additions into Slavonic in 1793, the Philokalia renewed Orthodox wisdom in the Slav world.  Already reputed to be out of date in 1782, wisdom centuries re-emerge in our time to renew the wisdom of sacred tradition to regenerate the world.

Wisdom is the living heart of Orthodox tradition, so when wisdom sings it is with a living transmission of ‘Wisdom Songs.’  Songs of the Holy Name awaken wisdom in songs of love which embody wisdom as a Song of Songs.  Songs of Holy Wisdom dissolve confusion and heal division so that Mysteries of Glory are unveiled, rounding the whole with songs of Wise Stillness.  Wisdom Songs are fulfilling their function when the uncreated light of wisdom illumines the heart and sings.  It is wisdom that is beautiful, inspiring love of beauty, philo-kalia.  ‘Wisdom Songs’ carries a Foreword by the Very Rev John McGuckin, and is available print on demand as a paperback of 527 pages from the printer Lulu.com at £19.94.  ISBN 978-0-9835867-0-8.

‘Wisdom and Wonder’ is a book of wisdom chapters in two ‘Centuries,’ the first on the wisdom of wonder, the second on the wonder of wisdom.  Stepping back from ‘Wisdom Songs,’ wonder awakens to the mysteries that give rise to them and to the glory that completes them.  The Fathers of the Church often refer to the mystery of theosis but in works of introduction rarely give it sustained attention.  ‘Wisdom and Wonder’ is Lectio Divina not academic theology or sentimental edification.  It transmits wisdom from heart to heart through contemplative assimilation rather than follow a rational argument or convey devotional emotion.

It is often assumed that Christianity is sentimental moralism without serious wisdom and that to welcome wisdom the seeker must turn to the Orient.  But there is an ancient East in the west that uncovers wisdom that renews tradition and it is the function of wonder to awaken and to sustain this wisdom.  It is not a question of acquiring new information but of awakening through wonder to wisdom in coherent, transfigured living.  It leads not to a shallow change of opinion but to a profound transformation, inspiring the heart to live in wise and wondrous openness.

The ancient wisdom genre of the Century is humbly aware that the role of discourse is provisional, that completeness is present in union not in speech, preserving the openness of wonder, to distinguish the therapy of wisdom from its counterfeits.  Wonder unveils wisdom but veils her from vain scrutiny, preserving her from objectifying inspection.  Protecting the mysteries from sophisticated curiosity, wonder veils what it unveils to conceal what it reveals.  In less challenging times, hermits would live this wisdom but remain silent.  But silence today is misread as absence, obliging the hermit to speak and even sing.  When the world’s secret wisdoms are translated and contribute to the emergence of integral wisdom world wide, the hermit sings wisdom songs, preferring wisdom to his own opinion.  ‘Wisdom and Wonder’ was published by the Sophia Institute on Broadway, New York, on November 16th 2011, with a foreword by Professor John McGuckin.  Printed by Lulu.com, the ISBN is 978-0-9835867-2-2, price £12.95.

‘Wisdom, Prophecy and Prayer’ is a book of wisdom chapters in three ‘Centuries,’ the ancient, monastic wisdom genre beloved by desert wisdom.  It arose from the same spiritual inspiration that inspired the construction of a Wisdom Round Cell in a hornbeam glade in the Monastery of St Antony and St Cuthbert in the south-west Shropshire hills.  It re-envisions prophecy as the transmission of revelatory wisdom and prayer as the assimilation of integral wisdom in the light of Orthodox Patristic Tradition.  It explores many aporia, examples of perplexing impasse which elders impart to awaken the heart, aporia which the ancients knew well but the moderns overlook when illumination of the heart is neglected.

‘Wisdom, Glory and the Name,’ is a book of wisdom chapters in two ‘Centuries,’ which completes the wisdom Tetralogy, an epic cycle of twelve Centuries that began with ‘Wisdom Songs.’  It returns to the mysteries of wisdom, glory and the Holy Name, but abides in the mysteries hid with Christ in God, the revelatory mysteries of the Bridal Chamber and the Holy of Holies.  As mysteries, these are ineffable and so inaccessible to the senses and to rational investigation, but wisdom discerns the ineffable and transmits what is discerned.  Wisdom discerns the glory unveiled in the Name and awakens the eye of the heart in uncreated light, challenging the widespread view that Christian wisdom is narrow and shallow, even null and void.  At a time when the world’s great wisdom traditions are flooding our cultural shores, Christian wisdom is obliged to break its traditional silence without profaning the sacred or violating the ineffable hiddenness of the Holy of Holies.

‘Wisdom, Glory and the Name,’ in two ‘Centuries,’ returns to where the epic cycle of twelve centuries began, with wisdom and the Name, but driven by necessity, opens to the mysteries of glory in ways that Patristic literature touches on only rarely and sparingly.  Ever present and ever aware, the wisdom of glory reveals God in the midst, renewing Patristic wisdom through the Name ‘I AM,’ unveiling the heart of Scriptural wisdom in the light of the glory of the hallowing Name.  ‘Wisdom, Glory and the Name’ was published on January 23rd 2014 by the Sophia Institute with a Foreword by the Very Reverend John McGuckin, Professor of Byzantine Christian Studies, Columbia University, New York.  It is available from Lulu.com at £12.98, ISBN 978-0-9835867-4-6.

‘Merlin on Manstone Mynd’ represents the wisdom themes of all twelve centuries in story form, through the figure of Merlin living on the Stiperstones, here called Manstone Mynd, in the historical setting of the Sixth Century.  It unravels the powerful energies of the quartzite tors and ancient mines in the light of the Song of the Name, brought back from Byzantium by Taliesin the Bard.  Merlin lives in Goatshaw Ring, the Gittenshay of the present day Monastery of St Antony and St Cuthbert in south-west Shropshire.  The story of Merlin springs from Geoffrey of Monmouth’s Life of Merlin and places the prophet, mage and seer in connection to saints like Gildas and Columba and secular contemporaries like Taliesin the Bard and Brochwell, ruler of Pengwern.  Relating to the Arthurian tradition of the Vulgate cycle and Mallory, it also relates to the Orthodox tradition of the Holy Name, assimilated in Britain from Byzantium.  It tells the story of how Taliesin brought the mysteries of Chalcedon back to Britain from Byzantium and how Merlin put them to work to heal the divisions that threatened to tear Britain apart.

Each of the twenty-eight chapters explores eastern Christian Orthodox acculturation from a different angle, employing ancient wisdom symbolism and poetic resonance.  Wisdom in Merlin’s hands unveils the powerful presence of the quartzite crags that have dominated the sky-line of Manstone Mynd since pre-historic times.  The book explores Merlin’s work of wisdom in relation to Taliesin’s work of bardic poetry, re-interpreting the myths and legends that lie at the heart of the Matter of Britain.  Vertical chapters of poetic resonance are interspersed with horizontal chapters that ground wisdom in the historical world of the Sixth Century.  Meticulously researched, these chapters weave the Arthurian story into a bold tapestry of saints and seers that owes much to the Inklings, Tolkein and Williams, yet is in dialogue with the more recent legacy of Rowling, opening the timeless world of ancient British story-telling to the cutting edge of integral wisdom.  A strong underlying engagement with the wisdom of Byzantium opens the ancient Matter of Britain to a contemporary engagement with wisdom transmission, restoring a forgotten wisdom that was decimated by the Norman Invasion.

‘The Practice of Harmony in Orthodox Christian Wisdom,’ was published on the Harmony Project Website on March 18th 2019 by Priest-monk Silouan.  It forms part of the Sophia Harmony Initiative in the University of Lampeter inspired by the writings of HRH The Prince of Wales on Harmony.   https://www.theharmonyproject.org.uk/practice-of-harmony-in-orthodox-christian-wisdom/