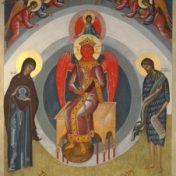 In St Columba’s underground cell on Hinba, old Gaelic for Isle of the Sea, inspired by Columba’s spiritual elder, Enda of Ireland, it was still possible to pray in the heart, pray in timeless light, lucid and luminous, unveiling primordial glory in the spontaneous immediacy of unconditioned grace.  On retreat there in June 1974, this underground cell became a place of grace where… Read more »