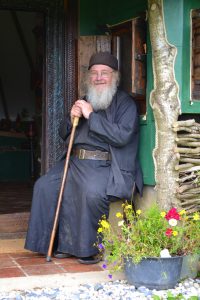 Father Silouan has lived in a Wisdom Hermitage in St Davids since 2019, after a few months in a hermitage in Essex in 2018 and seventeen years in the desert as a hermit Priest-Monk in the Monastery of Saint Antony and Saint Cuthbert at Gatten on the Stiperstones (2001-2018), following ten years in the Monastery of Saint John the Baptist at Tolleshunt Knights in Essex (1990-2000).  Father Silouan met Saint Sophrony the Hesychast in 1965 and later became a monk in his monastery, a monastery that was profoundly inspired by Saint Sophrony’s elder on the Holy Mountain, Saint Silouan the Athonite.  Father Silouan continues to live an Orthodox Hesychast monastic life in St Davids, as in the Hesychast Monastery in Shropshire, with the blessing of his Bishop, Metropolitan Joseph, and with the enthusiastic encouragement of many who have been supporting him in Shropshire.

in June 2017, six trustees of the Stiperstones Trust decided to offer the twenty acre  monastic site to Archimandrite Philip Hall to become an Antiochian Archdiocesan Monastery under the jurisdiction of Metropolitan Silouan and this intention was confirmed at a Trustees Meeting on September 2nd 2017.  Since July 2018, the Monastery at Gatten has been occupied by the Brotherhood of St Peter and St Paul, in the Archdiocese of Antioch, which currently consists of Father Philip with aspirants to the monastic noviciate.   The monks can be contacted on the monastery email <info@orthodoxmonastery.co.uk>

All who have been following this Wisdom Journal over the last few years on the Stiperstones Trust Orthodox Monastery website <www.orthodoxmonastery.co.uk>  continue to have access to it here on this website <www.wisdomhermitage.org.uk>

All those visiting this website for the first time are welcome and will be able to contact Father Silouan by email, <silouan571@gmail.com>.   If you wish to contact him by telephone, Father Silouan’s Wisdom Hermitage number in St Davids is 01437 721718 or from outside the UK, 0044 1437 721718.